The GRSM Band Program is a Full Year* program which begins the second week of September and culminates with the Spring Concert in May.  There are a minimum of 30 teaching sessions provided during the academic year, consisting of lessons, rehearsals, school performances and concerts.

Sectional lessons for Beginning and Concert Band students will be held during the school day in 30-minute blocks in a rotating schedule (different time each week of the month), unless otherwise requested by your school administration.  For 2019-2020, the Symphonic Band students will meet after the Concert & Symphonic rehearsal, in order to avoid missing academic classes during the day.

NEW this year: Your Band Director will be available til 6pm to offer private lessons in brass, woodwinds and percussion instruments!!

If you are interested, please include your request on the same Registration Form – $28/half hour 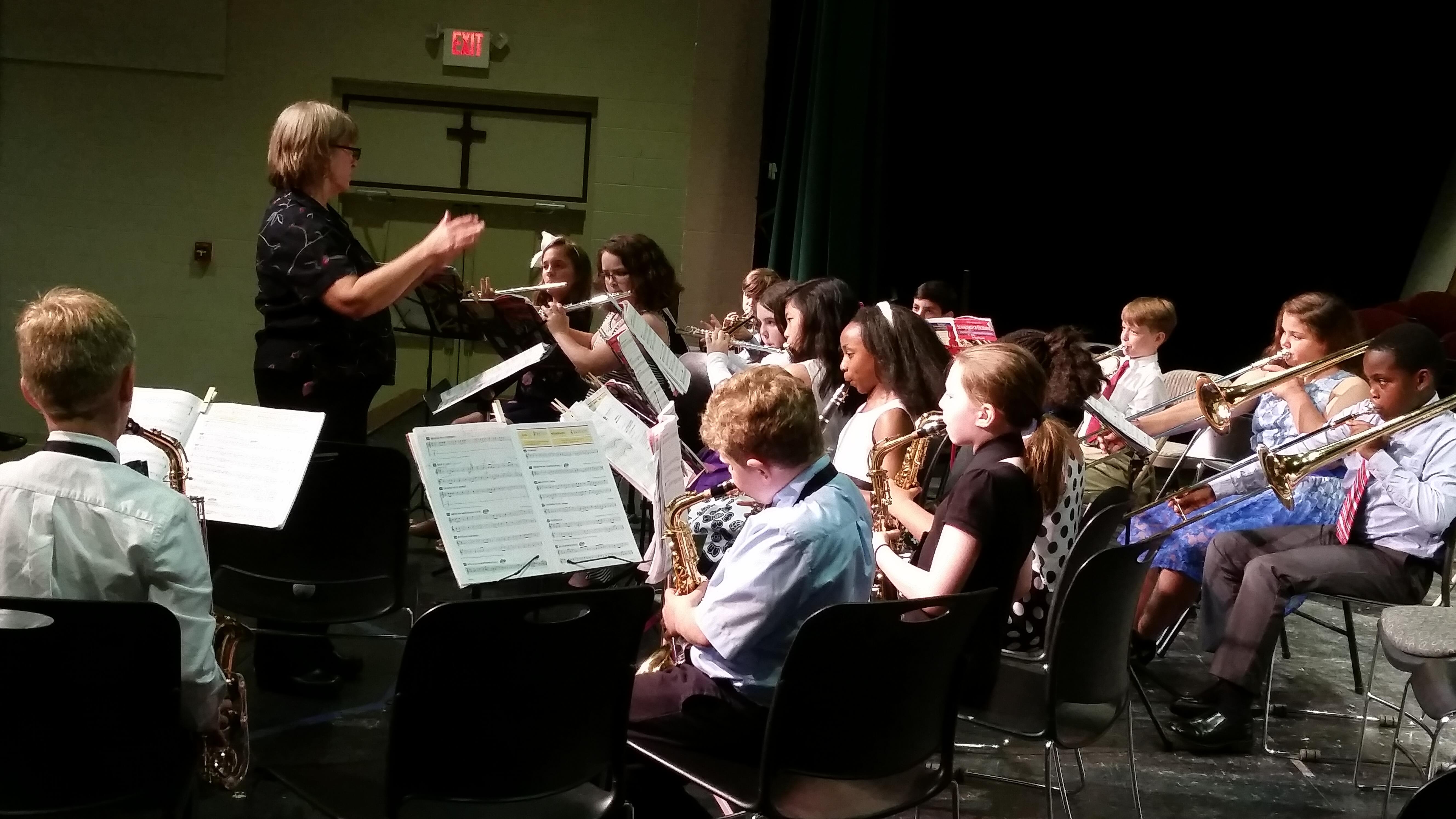 The Beginning Band is a beginning level group for students who are learning to play a band instrument for the first time. Recommended beginning instruments are flute, clarinet, saxophone, trumpet, trombone and percussion (multiple instruments).  Each individual will be assessed and advised on “best fit” instrument at the first class.  Instruction is focused on developing a solid foundation in note reading, tone production, rhythm, articulation, proper posture/hand position, and instrument care and maintenance.  Students also learn basic music theory concepts and ensemble skills, such as balance and blend.  Beginning Band members receive a 30-minute sectional lesson each week. The students are grouped with others who play the same family of instruments, and the lessons are scheduled on a rotating basis during the school day.  As a performance date nears, the beginning band lesson groups join together and rehearse as a full ensemble. Students in 4th Grade and up are eligible for this ensemble.   No previous music experience is necessary, and students should be able to learn all that they need in the weekly sessions provided by GRSM (and daily practice).  Additional private lessons are always a boost, but are definitely not required.  Here’s what last year’s beginners sounded like at the Spring Concert. 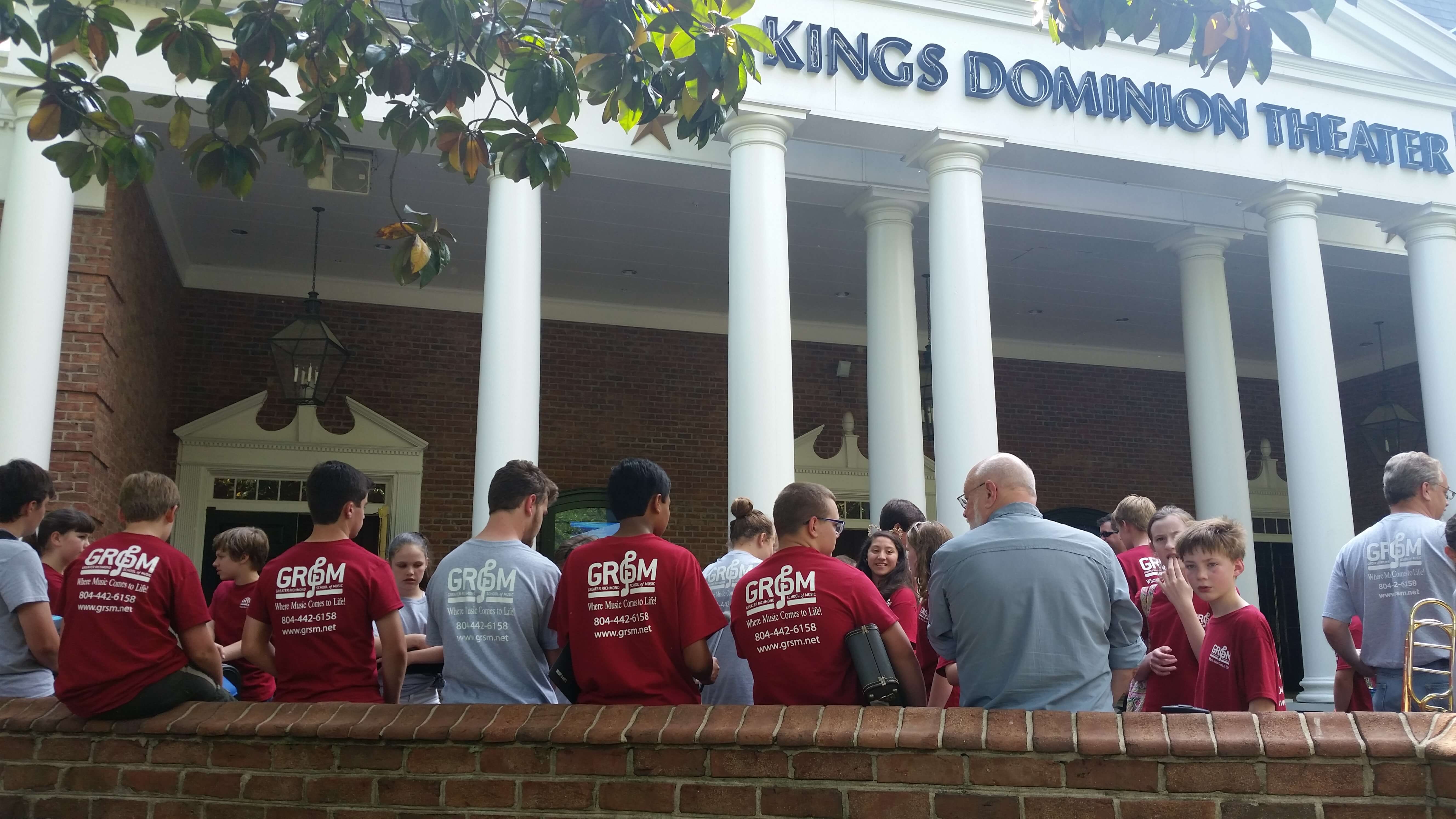 The Concert Band is an intermediate level group for students who have had 1-3 years of experience playing a band instrument. Concert Band members receive a 30-minute sectional rehearsal as well as a 1-hr full ensemble rehearsal each week. The sectional rehearsal is scheduled on a rotating basis during the school day, and the full ensemble rehearsal is held from 3:00-4:00 pm on the same day.  In addition to continued development of basic instrumental music foundations, instruction focuses on the finer details of playing in an ensemble. Students in the Concert Band receive instruction on music theory and learn scales to improve technique and expand range. The sectional rehearsals offer the opportunity for the students to learn and perform chamber music or small ensemble pieces.

CLICK HERE for performances at KINGS DOMINION Festival of Music 2019 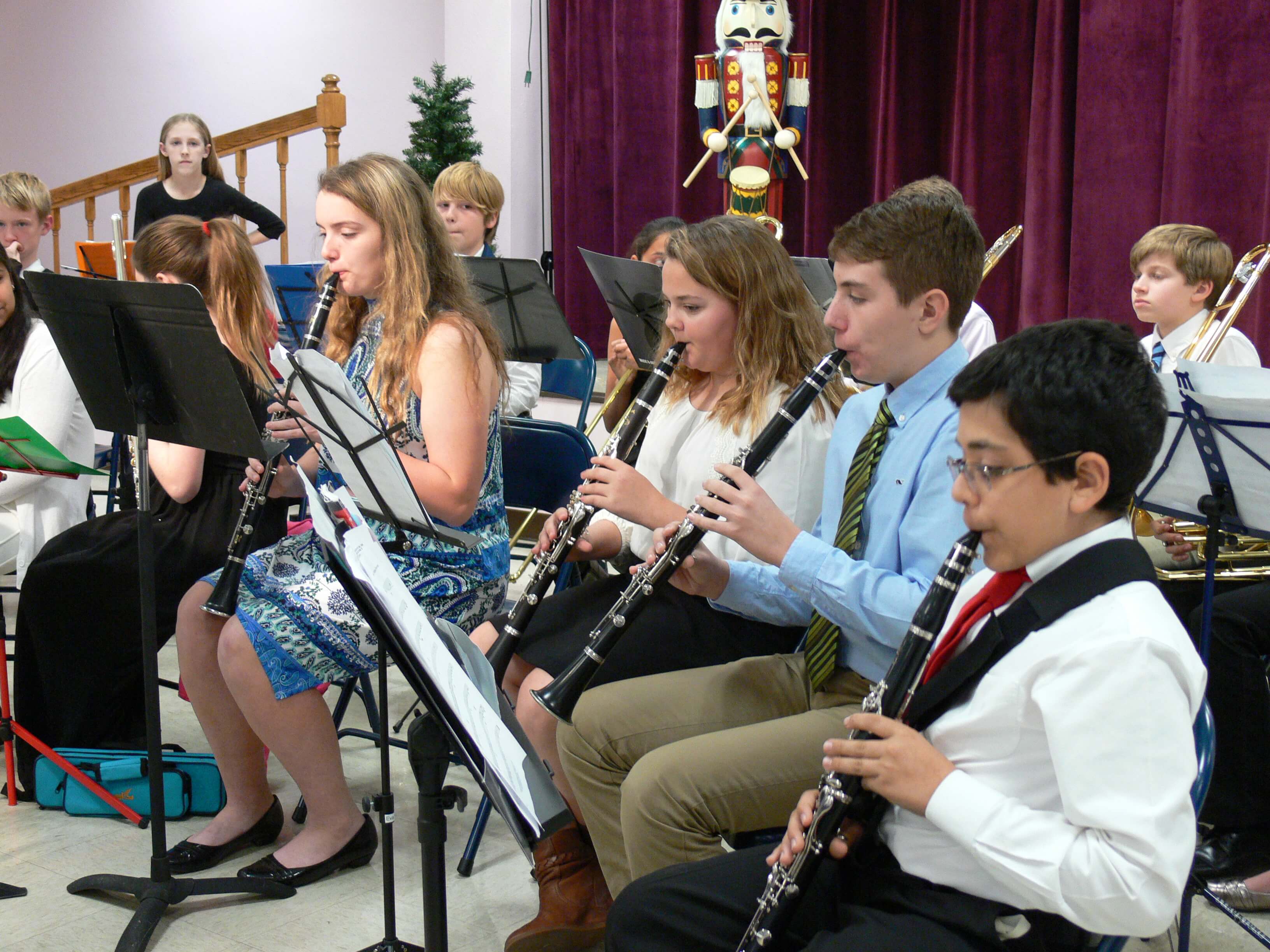 *  Disenrollment from the program may be allowed only after the student has completed the first semester of classes and upon completion of the GRSM Band Program Disenrollment Form signed by the parent/guardian of the student.  This form must be received by GRSM no later than January 7th.  Once it is determined that continuity of the program for the remaining students will not be jeopardized, the registration contract will be terminated at the end of the semester.

The overall Director/Coordinator of the Greater Richmond Band Program is Robert W. (Bob) Ellithorpe who, having attained his B.M.Ed. at VCU and M.M. from University of Richmond, has accrued over 30 years of experience in instruction and band direction at elementary, middle and high school levels in Hanover and environs as well as instructing at VCU, Randolf Macon, University of Richmond, Garwood Whaley, Greater Richmond School of Music and his own private studio. He has guest conducted with numerous bands, and his performance repertoire is very long including 18yrs with the Richmond Symphony. He has also been on a number of adjudication teams and has a long list professional affiliations and recognitions including being listed in the Who’s Who Among America’s Teachers 1996, 2000, 2002, 2004, 2006 and more recently was elected to Phi Beta Mu Virginia Band Director’s Hall of Fame-2013.

Mr. John Scott is a native of Richmond, Va. and is a 1978 graduate of Huguenot High School. Upon finishing high school, Mr. Scott attended Howard University in Washington, D.C., where he earned his Bachelor of Music Education and a minor in trumpet pedagogy.  He holds the Master of Applied Music from Virginia Commonwealth University.  Mr. Scott is the former director of Henrico High School Bands and is currently teaching at Wilder Middle School in Henrico County. He has taught band for over 36 years in public and private schools. Mr. Scott’s High School Jazz, Concert, Percussion and Marching ensembles have earned numerous excellent and superior ratings at Virginia band competitions and music assessment festivals.  Mr. Scott is a lifetime member of Phi Mu Alpha professional music fraternity and is a member of MENC and VMEA professional teaching organizations. He also teaches private lessons and performs in the Richmond area.

Mr. Tom Anderson is a product of Henrico County Schools, who earned his Bachelor’s degree in Music Education for Virginia Commonwealth University in 1977, and his Master’s degree in Music Theory and Composition in 1990. After teaching elementary and middle school band classes for five years in Henrico County Mr. Anderson made the move to elementary music classes in 1984, and remained at Glen Allen Elementary School as the music teacher for 25 years, until his retirement in 2010. In 2004, Mr. Anderson received the 2004 MUSIC EDUCATOR OF THE YEAR AWARD, and in 2010 he received the GILMAN TEACHER OF THE YEAR NOMINATION at Glen Allen Elementary School. As an active musician, composer, arranger, and private brass instructor for over 40 years, Mr. Anderson continues to pursue his love of music and performance. He currently performs in many local music groups as a trombonist, and GRSM is honored to have him assist with our own band program.